BONNIE AND CLYDE (1967). Director: Arthur Penn.
Bonnie and Clyde go on a crime spree robbing banks in the 1930's and become folk heroes to part of the population, but their days are numbered. This film was quite polarizing when it first came out, with some finding it slick and cinematic; others repellent and empty -- both viewpoints have validity. Warren Beatty [Splendor in the Grass] isn't bad as Clyde Barrow, the leader of a group of depression-era bank robbers, but he's never quite believable, either. The same could be said of Faye Dunaway [Mommie Dearest]  as Bonnie Parker, although she certainly demonstrates star-making vitality. The trouble with both of the leads is that they never seem quite as stupid as the people they're playing. Gene Hackman, Estelle Parsons and Michael J. Pollard as relatives and fellow gang members are perhaps more on the mark.
Today Bonnie and Clyde seems almost benign next to Goodfellas and similar movies. The picture doesn't really glorify these murdering robbers so much as it shows how pathetic and desperate they and their self-absorbed lives really are. But the movie can't really be considered a serious examination of these people because the characters lack dimension and the film can't seem to make up its mind whether or not to take them -- or itself, in fact -- seriously. In any case, the picture is generally entertaining and well-done, but it goes on about half an hour too long and is very Hollywood-ized to say the least. One could make a strong case that William Witney's The Bonnie Parker Story, made ten years earlier, is the better picture.
Verdict: Okay, but maybe watch Little Caesar instead. **1/2.
Posted by William at 9:25 AM 2 comments: 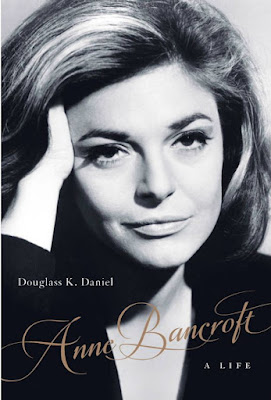 ANNE BANCROFT: A LIFE. Douglass K. Daniel. University Press of Kentucky; 2017.
Anne Bancroft was typical of a lot of what we might call "second tier celebrities." Bancroft was accomplished and celebrated, an Oscar-winner, and had a highly successful career, yet for most of her life she was not really "bankable." Her husband, Mel Brooks, may have even become the bigger "name" at one time. In spite of this, Bancroft managed to amass many credits on TV, on the stage, and in films, with her most famous movies being The Miracle Worker (recreating her stage role) and The Graduate. This excellent biography covers her entire life and career from girlhood to death, and does so with intelligence and sensitivity. Author Daniel also analyzes Bancroft's technique in different roles, and doesn't shy away from recording times when she was off her game, at least according to certain critics. Bancroft toiled in B movies like Gorilla at Large and The Girl in Black Stockings, before entering a new phase and new admiration on Broadway and elsewhere. On the stage Bancroft tackled challenging roles in works such as The Devils and Mother Courage. The book is bolstered with many comments from people who knew and worked with the woman. Bancroft's first movie was Don't Bother to Knock, where she was upstaged by Marilyn Monroe but gave the better performance. She wisely turned down such projects as Myra Breckinridge and Mommie Dearest.
Verdict: Excellent on every level and a good read as well. ****.
Posted by William at 9:15 AM 2 comments:

TREASURE OF THE GOLDEN CONDOR

In 18th century France Jean Paul (Cornel Wilde) becomes the bonded servant of his hateful uncle the Marquis de St. Malo (George Macready). Jean also falls in love -- and vice versa -- with his cousin Marie (Anne Bancroft). Jean is the rightful heir to the estate and money but there is no proof that his parents, who died at sea, were ever married. Jean figures only money can get him out of his predicament, especially after he is arrested for assaulting his uncle and trying to flee, so he takes off on a treasure hunt in Guatemala with a man named MacDougal (Finlay Currie).

In Guatemala the two men set off with MacDougal's daughter Clara (Constance Smith) and look for a stone serpent to guide them to the treasure. Despite the fact that the movie made much of the fact that some of it was filmed in Guatemala, it doesn't especially add to the film's veracity, especially when the treasure seems to be found in a matter of minutes. There's a snake, a cave-in, and minimal excitement in the treasure scene. Then Jean returns to France, is put on trial, and has a rousing and satisfying final battle with his awful uncle, the best and most memorable sequence in the movie. Wilde gives a charismatic lead performance, with good support from a slimy Macready and a passionate if duplicitous Bancroft in one of her earliest roles. (When she eyes Wilde with his shirt off you can imagine she'd rather cozy up to him than Dustin Hoffman!) Irish actress Smith had about thirty credits but never hit the heights. Fay Wray has a supporting part as Macready's wife, and Leo G. Carroll is also in the cast, but I didn't recognize Robert Blake as a nasty stable boy.  The rich score by Sol Kaplan is beautifully orchestrated by Edward Powell. The main problem with this movie is that the viewer will expect it to be about a treasure hunt but that only takes up a small portion of the picture.

Verdict: Good cast can only do so much with comparatively weak and derivative material. **1/2.

HOUSE OF GUCCI (2021). Director: Ridley Scott.
Maurizio Gucci (Adam Driver) is smitten with the outgoing and ambitious Patrizia (Lady Gaga), and soon afterward they are married. Maurizio's father, Rodolfo (Jeremy Irons) isn't entirely taken with the union, but his brother, Aldo (Al Pacino) welcomes Patrizia and his nephew to New York. Then there's Aldo's son, Paolo (Jared Leto of Urban Legend), who is treated like a moron by his father, and who wants to design his own line. There are behind-the-scenes battles for control of the Gucci company, and then Maurizio has the temerity to have an affair and ask for a divorce. Patrizia is not going to take this lying down ...
House of Gucci is an entertaining and well-acted biopic and suspense story (even if you know the outcome) that holds the attention throughout its length. Lady Gaga is good, but I suspect there are other actresses who could have made more of the part. Driver and Leto (although he's initially over the top) are also quite good, but the pic is nearly stolen by a wonderful Pacino and especially Jeremy Irons as the father. If you're hoping to see some courtroom dynamics, be warned that the film ends rather abruptly with the arrest of certain parties -- you'll have to watch details of the murder trial on Dateline, which covered the story more than once.
Verdict: Well, you may not rush out to buy a Gucci bag, but all the skullduggery in this is fascinating. ***1/4.
Posted by William at 9:05 AM 2 comments: 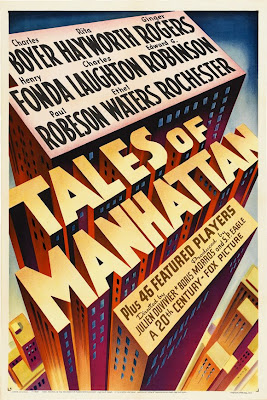 TALES OF MANHATTAN (1942). Director: Julien Duvuvier.
This very entertaining film is a series of tales connected by a tailcoat that proves lucky or disastrous for whoever wears it, including an actor (Charles Boyer) who is in love with a married woman (Rita Hayworth); a man (Cesar Romero) who is about to get married and who has a jealous fiancee (Ginger Rogers) and a friend (Henry Fonda) who tries to help him; a musician (Charles Laughton) whose wife (Elsa Lanchester) gets him the tailcoat to wear on the night he conducts his symphony, to disastrous (and somewhat unlikely) results; and a down-on-his luck lawyer (Edward G. Robinson) who wears the coat to a reunion of his ivy league college buddies who have no idea of how far he's fallen. The final sequence stars Paul Robeson, Ethel Waters, and Eddie Anderson in a charming tale of poor folk (who are not exactly in Manhattan) who have to decide how to spend the money that falls out of the tailcoat. A brief but amusing sequence with W. C. Fields (appearing with Margaret Dumont!) lecturing society folk was cut out for the initial theatrical release, but has been wisely reinstated. The entire cast is good, with special honors going to Boyer, Robinson, and Fields.
Verdict: Who knew a movie about a coat could be such fun? ***.
Posted by William at 9:02 AM 2 comments:

Special projects have caught up with me temporarily.  GREAT OLD MOVIES will return in May 2022, if not before.

For those who subscribe by email the posts come with the wrong, outdated email attached at the very bottom. I'm working to correct this. In the meantime you can contact me anytime at wmschoell@gmail.com.

Posted by William at 9:20 AM No comments: