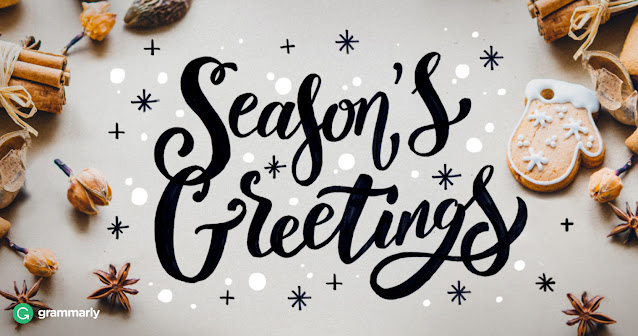 GREAT OLD MOVIES will be back in the new year! Happy Holidays everyone!

(and get vaccinated when it's available!)

MIDDLE OF THE NIGHT

"A small bubble of middle-aged sanity has been punctured."

56-year-old Jerry Kingsley (Fredric March, who was actually in his sixties) is a widower in the garment business who consoles Betty (Kim Novak), a woman who works for him one evening, and then finds himself falling for her. She agrees to date him but tells him bluntly that she could never love a man old enough to be her father. Or could she? Both Kingsley's and Betty's families are horrified when they learn that the two are engaged.
Although this adaptation of the play by Paddy Chayefsky (who also did the screenplay) got mixed reviews at the time of its release, it emerges as an excellent, trenchant and uncompromising study of the relationship between a woman in her twenties and a man in his fifties. It's interesting that the film never comes off as mere wish-fulfillment fantasy for middle-aged men, being on a much higher level. March offers a superb performance that never once hits a false note. Although not on March's level of consummate ability, Novak is nevertheless quite good and appealing as Betty. Edith Meiser, Lee Grant, Glenda Farrell (as Betty's mother), Joan Copeland and Martin Balsam are all on target in their respective roles, and Albert Dekker offers the performance of a lifetime as Walter Lockman, the salesman with the big talk who poignantly pours out his lonely heart to March when he learns the latter plans to marry. The film is full of wonderful and true observations about what it means to get old in our society. As Jerry says to Betty, "I'm scared of things you wouldn't understand because you're just a kid." Chayefsky's dialogue and characterizations are top of the line. Ultimately the movie is about seeking out and holding on to life-affirming experiences no matter what your age. "You can have peace when you're dead," says Jerry. Amen to that! 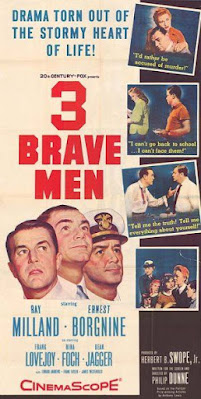 THREE BRAVE MEN (1956). Director: Philip Dunne.
Bernie Goldsmith (Ernest Borgnine) is horrified to discover that he's been summarily fired from his government job because he's been deemed a security risk due to an alleged "radical" (i.e. communist) past. He hires lawyer Joe DiMarco (Ray Milland) to defend him. Apparently Goldsmith angered some people because of his activism in minority housing (oddly, the subject of anti-Semitism is never broached). Even after a board presided over by Captain Wingfield (Frank Lovejoy) and Lt. McCoy (Nina Foch) clears Goldsmith, he still can't get his job back or get hired by anyone else. DiMarco takes the case to the Army man, Rogers (Dean Jagger), who had the board's decision reversed. Three Brave Men intelligently examines how gossip and innuendo, jumping to conclusions, and sheer sloppy investigating can ruin someone's life as it did many during the McCarthy anti-communist era. The film also has a nice subtext examining how the whole ordeal has revealed how strong Bernie's marriage to his wife (Virginia Christine) is. Still, it's all a bit matter of fact, with few nuances and shades of gray. Yet the fact that it was even made in 1956 -- years before our deplorable "cancel culture" -- speaks volumes. Dr. No's Joseph Wiseman has a notable cameo as a bigot.
Verdict: Absorbing story of family's ruination and their struggle back. ***.
Posted by William at 9:15 AM 2 comments:

Lord Terence Datchett (Stewart Granger of Footsteps in the Fog) is a confirmed, rather misogynous bachelor who at the opening helps a friend run away from his own wedding. When Terence learns that French film star Colette Marley (Edwige Feuillere) is bored with men and only wants to be "left alone" to write her memoirs, he offers her his estate, but pretends he is not Lord Datchett but only the estate agent. When Colette learns that the deceptive Terence plans to prove that she is definitely not bored with men, she decides to turn the tables on him. Bolstering one conspiracy after another are butler Jameson (Ronald Squire), Colette's maid. Clair (Jeanne De Casalis), the stableman, and Terence's lovely mother, Lady Datchett (Mary Jerrold).

Woman Hater is a British version of a battle of the sexes (but hardly screwball) comedy that falls flat due to a lack of real laughs and occasional slapstick that backfires. Granger is adequate as Terence, although he lacks that certain skill at comedy a la Cary Grant. Edwige Feuillere was a well-known and celebrated French film and stage actress who tried her hand at an English-language film but soon went back to France. She is more than credible if not that amusing in a part that Claudette Colbert could have walked away with. The supporting cast, including Miles Malleson [The Thief of Bagdad] as the Vicar and Peter Bull [Dr. Strangelove] as Mr. Fletcher, are perfect, however.
Verdict: Very, very predictable and not at all funny. **.
Posted by William at 9:10 AM 2 comments:

A MATTER OF JUSTICE

A MATTER OF JUSTICE (aka Final Justice/two-part telefilm/1993). Director: Michael Switzer.
Mary Brown (Patty Duke) is appalled when her son, Chris (Jason London), decides to enlist in the Marines at seventeen, but wait until she meets his skanky 24-year-old bride, Dusty (Alexandra Powers), whom he shows up with when he comes home on leave. Mary's husband, Jack (Martin Sheen), thinks Chris should be allowed to make his own decisions, and that they should give Dusty a chance. Dusty proves an unfaithful wife and neglectful mother to their little girl, but Jack -- who regrets his own life and marriage -- tells Chris that he should try to make things work with Dusty if he loves her. When Chris, who has filed for divorce, is butchered, another marine is arrested for the murder, but Mary is convinced that Dusty was behind the slaying, and will stop at nothing to see that she is brought to justice.
A Matter of Justice is an absorbing, well-acted telefilm based on a true case. Patty Duke is hardly perfect casting, and at times she seems to be auditioning for a role on a night-time soap as a matriarchal diva, but she is generally passionate and effective, although a more under-stated Sheen is even better. Jason London makes an appealing Chris, and Alexandra Powers is a sexy femme fatale. Of the supporting cast both Jeff Kober and Cole Hauser make their mark as bad boys who bed and beat Dusty; Charles S. Dutton is notable as a private detective Mary hires; and 5-year-old Kyla Pratt makes an adorable Chrissie, the Brown's granddaughter -- there are other good performances as well. An interesting aspect of the film is the sub-text of Mary and Jack rediscovering their love for and commitment to one another as they deal with a tragedy and its aftermath.
Verdict: Generally intelligent and well-written true crime drama.***.
Posted by William at 9:05 AM 2 comments:

Stephen Booker (Martin Sheen), an American architect living in England with his wife (Susannah York) and children, discovers that a certain deal didn't go through and he has lost his job. He also discovers that potential employers find him over-qualified, and there are no openings anywhere. Meanwhile, his and his wife's debts are mounting, the kids are in expensive private schools, bank loans are being called in, and things look pretty dire. Mike Daniels (Albert Finney) does offer Booker a job doing work on a building that he owns, but it turns out that Daniels doesn't really own the building and the job actually has nothing to do with floor extensions and everything to do with robbing the safety deposit vault in a bank. Booker can use his expertise to get the men through the rat-infested sewers below the bank and up to where the booty waits. At first Booker is appalled by Daniel's proposal, but as his debts mount up he decides to join in ...

Loophole is one of those caper films in which the robbers seem like friendly, nice guys who would never think of shooting anyone or betraying one another, and even Booker -- who was pulled into this scheme in a very duplicitous way and should be furious -- seems to be enjoying their company. The possibility that Booker may have planned or even achieved revenge on all of them is only intimated, and many viewers felt cheated by the somewhat abrupt and ambiguous and even illogical ending. A climax in which the tunnels are flooded as the thieves try to escape is well-handled, but it's hard to believe there would be such raging torrents in the sewers after such a short period of heavy rain. The film holds the attention but the characters are not developed that well. The very American Sheen and very British Finney actually work together very well, and although her part is small Susannah York has some good moments as Mrs. Booker. Robert Morley has only two brief scenes as Booker's anxious banker, but his presence is always welcome. Jonathan Pryce also scores as one of the robbers.
Verdict: Rats, sewers and floods are always fun. **1/2.
Posted by William at 9:02 AM 2 comments: