55-year-old geography teacher Miss Dove (Jennifer Jones) has to go into the hospital for tests, and uses the time to reflect upon her life and her influence upon her students. Known as "the terrible Miss Dove" by certain townspeople, she is a rather grim and completely humorless, outwardly unemotional old maid, but despite her demeanor she can be kind to her pupils, especially a young boy named William who grows up to become a cop (Chuck Connors). Both her nurse (Peggy Knudsen) and doctor (Robert Stack) and his wife (Kipp Hamilton of War of the Gargantuas), as well as the town priest (Biff Elliot) are also former students.

There are several moving sequences in Good Morning, Miss Dove, but while I generally admire sentiment in old movies, this picture becomes a bit too unrealistic. With her unpleasant personality it's hard to believe that that many townspeople would care that much about this persnickety, disapproving and prune-faced spinster, giving this an ending that is pure Hollywood. Jones, who realistically ages from about twenty to middle-age, gives a very good performance, but there are huge gaps that fail to explain exactly why she's become the way she is. An early sequence shows her regretfully turning down a suitor's (Marshall Thompson) proposal as she has a family obligation that forces her to work and repay a debt, but we never learn why there were apparently no other suitors during her youth. There is also some bad sitcom-like nonsense about a student who grows up to become a petty crook and escapes from jail.

In addition to Jones, most of the cast members (including some marvelous child actors) acquit themselves nicely, with Thompson notable in his one sequence with Jones, and there's also good work from Connors [South Sea Woman] , Stack, etc. and especially Peggy Knudsen [Hilda Crane] as the nurse Billie Jean, who had a child out of wedlock. Leigh Harline has contributed a pleasant and soapy score that is effective for the picture. Good Morning, Miss Dove is quite similar to the 1941 movie Cheers for Miss Bishop, which also examines a small town and the life of a teacher, but is a much, much better movie.

Gangster Joe Macbeth (Paul Douglas) is made the number two man in an outfit run by DeLuca, "the Duke" (Gregoire Aslan), but his wife, Lily (Ruth Roman of The Baby) thinks he ought to be number one himself. Mrs. Macbeth importunes her husband to knock DeLuca off when he comes for a visit at their estate, and this is only the first of several murders as the Macbeths opt for power and try their damnedest to hold on to it. But when Macbeth has his suspicious friend, Banky (Sidney James of The Man in Black), taken care of, he'll have to face the wrath of Banky's furious son, Lennie (Bonar Colleano of Pool of London).

Joe Macbeth is an obvious updating and vulgarization of Shakespeare's tragedy Macbeth, but even on its own terms it just doesn't work. Douglas has been seen to better advantage in other pictures, Roman is not that convincing as a Lady Macbeth type, and even the highly talented British actor Bonar Colleano, although he has some fine moments, is somewhat lacklustre as Lennie (his character is actually a combination of Macduff -- although another guy is named "Duffy" -- and Banquo's son, Fleance). Joe Macbeth is also a disappointment as a gangster movie, lacking the tension, suspense, and excitement that the genre requires. As others have noted, you keep waiting for the Shakespearean "moments" instead of being gripped by the story. Another problem are those moments of black comedy that don't fit the tone of the picture (most of these have to do with an ever-hungry rival mobster named Dutch, played by Harry Green). 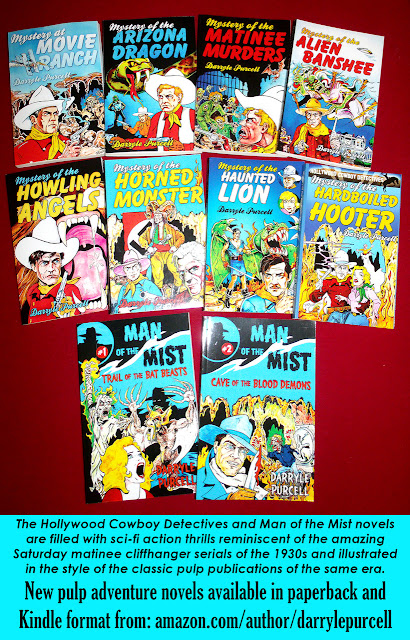 If you're fans of those great old classic cliffhanger serials as I am, not to mention "B" westerns (okay, I wasn't crazy about this week's Romance on the Range, but I've enjoyed other flicks in the genre), then you might want to check out a whole series of books written by Darryle Purcell, such as Mystery of the Matinee Murders, Mystery at Movie Ranch, Mystery of the Hardboiled Hooter and Trail of the Bat Blasts, which is part of "The Man in the Mist" series.

These are all available on Amazon in inexpensive Kindle editions and in paperback.

The days of Pulp Adventure go on!
Posted by William at 9:25 AM No comments:

Down in Panama a singing dancer named Hattie (Ann Sothern of Fast and Furious) has fallen for a wealthy Army man named Dick (Dan Dailey of It's Always Fair Weather), This is bad news for three sailors -- Red (Red Skelton), Rags (Rags Ragland) and Rowdy (Ben Blue) -- who are smitten with the gal and whom she relies on for emotional support. Hattie has some problems with her man when she meets his eight-year-old daughter and a woman named Leila Tree (Marsha Hunt of Smash Up), who is convinced she is more suitable for Dick. Reluctantly, Hattie agrees, at least for awhile ...

Based on an old Broadway show, Panama Hattie is as insubstantial as lint. The only real thing is has going for it, aside from some spirited performers, is the music, which consists of such Cole Porter tunes as "Just One of Those Things: (sung by Lena Horne) and other songs by Edens and Harburg ("Let's Be Buddies"). Sothern at least appears to be dubbed (although she could sing), but we hear the real voice of snappy Virginia O'Brien, who employs her deadpan style in some numbers ("Boy, Did I Get Stinkin' at the Club Savoy") and actually smiles during others ("I'm in Love"). Another highlight is a great dance number by a trio of talented black guys

In the "slob vs snob" sub-plot, Leila is made as affected and unpleasant as possible, but Hattie really doesn't have much class. When Dick's little girl laughs, not unkindly, at Hattie's over- elaborate outfit, the adult practically calls the child a bitch! More fun is provided by O'Brien, whose character unaccountably develops a hankering for Dick's disdainful butler, amusingly played by Alan Mowbray. There is some tiresome, mildly comical business at the end when the three sailors make like lesser case Stooges, go into a haunted house, and uncover a nest of dangerous spies. Skelton delivers a tasteless gag about having his legs shot off. Ragland was in the Broadway show, wherein Ethel Merman played Hattie. Ben Blue was a comic who started in silent pictures.

Verdict: Easy to forget but with likable players and some good numbers. **1/2.
Posted by William at 9:20 AM 2 comments:

ROMANCE ON THE RANGE

Roy Rogers (Roy Rogers of Arkansas Judge) is the foreman of the Arrowhead ranch. One of his buddies is murdered by poachers who are out for furs. The owner of the ranch, Joan Stuart (Linda Hayes), at first wants to hire a private detective to investigate, but instead goes out west, incognito, with her maid, Sally (Sally Payne), who has been corresponding with Roy's pal, Pat (Pat Brady), through a lonely hearts club. Pat and Sally are happy to finally meet, but Roy, not realizing that Joan is his boss, makes some tactless remarks about spoiled city women with too much money and no common sense. But meanwhile, he and his buddies have to capture the bad guys.

The trouble with Romance on the Range, a Republic Roy Rogers programmer if ever there were one,  is that there isn't much romance and most of the picture consists of fairly dull horse chases and shoot-outs that are not done nearly as well as in the classic Republic serials. Rogers gets by, as usual, on his looks and charm, and he doesn't have a bad voice when he warbles some unmemorable country ditties with the Sons of the Pioneers.  Linda Hayes appeared in a couple of "Mexican Spitfire" movies and did a number of westerns; this was her penultimate feature. Sally Payne amassed 57 mostly minor credits.

Pat Brady basically played himself in 73 movies and TV shows, most if not all with Roy Rogers. Ditto for Bob Nolan. Edward Pawley [Thirteen Women] plays the head bad guy, Jerome Banning, in this, and serial specialist Roy Barcroft is also in the cast. And we mustn't forget -- although we should certainly try to -- Gabby Hayes [From Broadway to Cheyenne], Rogers' grizzled, old and somewhat misogynous sidekick whose antics have not worn well with time. He did manage to get one -- only one -- laugh out of me, however. Romance on the Range is a "modern-day" western -- it does not take place during the days of the Wild West.

Verdict: Not much to this cheap oater but Rogers is always pleasant. *1/2.
Posted by William at 9:15 AM No comments: