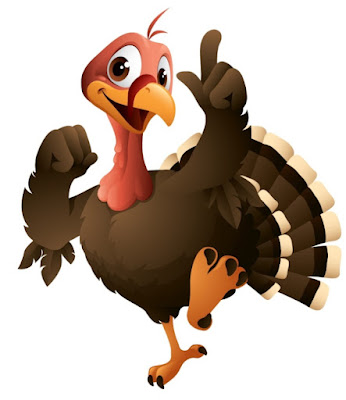 Jump for joy as you eat some turkey, pie, stuffing, potatoes -- stay off the bathroom scale for at least three days -- and watch some damn good GREAT OLD MOVIES.

Posted by William at 9:00 AM No comments: 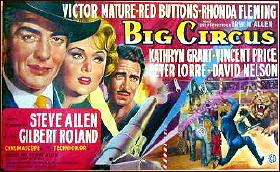 Circus owner Hank Whirling (Victor Mature) has just split off from his former partner and is determined to make a go of it on his own. Randy Sherman (Red Buttons) is assigned by the bank that loaned him money to keep him on the financial straight and narrow and also hired a public relations woman named Helen (Rhonda Fleming). For reasons that are never quite explained, Hank objects to having a woman doing publicity for him, and the two come to figurative blows almost immediately. A bigger problem is that an unknown person working with Hank's former partner is committing dangerous acts of sabotage. A variety of problems seem to be working against the circus' success as the bank keeps threatening to foreclose ...

Producer Irwin Allen later became famous for his disaster flicks but The Big Circus is no disaster. The film is well-paced and quite entertaining, with some very satisfying performances. Red Buttons and Gilbert Roland as a first-class high-wire aerialist, come off best, along with Kathryn Grant, saucy and sexy, as Hank's sister. Mature saunters through the movie with his usual aplomb and Fleming is also appealing as his very feminine combatant. Vincent Price is adept if under-utilized as the ringmaster, and David Nelson [The Remarkable Mr. Pennypacker], although he has little to do until the climax, plays a role very different from his part on The Adventures of Ozzie and Harriet. Peter Lorre is as lovable as ever as a clown in greasepaint. Although the process work isn't always great, the best and most suspenseful scene has to do with Roland's thrilling walk on a cable across the entire length of Niagara Falls!

Verdict: This is superior to Jumbo and The Greatest Show on Earth. ***.

THE BATMAN (2022). Director: Matt Reeves.
In a Gotham City wracked by corruption and vice, the determined Batman tracks down a serial killer whose victims include the mayor. That's the essentials of the plot of this movie, which turns out to be far better and more entertaining than I would have imagined. Effectively directed by Matt Reeves, The Batman boasts a terrific look -- thanks to cinematographer Greig Fraser and some excellent art direction -- and despite a few variations manages to get into the spirt of the comic books. Michael Giacchino has also contributed a creepy score that adds immeasurably to the picture.
And then there's Robert Pattinson, who plays the Batman and Bruce Wayne and is incredibly intense in the part. One could argue that Pattinson makes absolutely no distinction between Bats and Bruce -- in the comics Wayne did his best to act like a frivolous playboy to keep people from suspecting the truth -- but The Batman makes it clear that Batman is the real person and Bruce is the phony identity. In any case, Pattinson's performance works beautifully. In this movie Batman is so grim that he often scares the very people that he's just saved (as often happened in the comics).
There are other good performances as well. Zoe Kravitz as Selina Kyle (Catwoman); Andy Serkis as Alfred the butler; Paul Dano (of Prisoners) as the Riddler; Jeffrey Wright (of Casino Royale) as Lt. James Gordon; and John Turturro as Carmine Falcone. Colin Farrell makes a weird, unrecognizable Penguin. The film has a deliberate pace -- and one too many anti-climaxes -- but it held my attention, and I have to say I was delighted to see not a trace of camp. Matt Reeves also directed Cloverfield.
Verdict: The Dark Knight done right. *** 1/4.
Posted by William at 9:15 AM 4 comments: 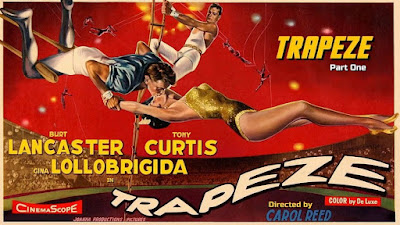 Bitter former acrobat Mike Ribble (Burt Lancaster) is working as a rigger for a Paris circus after falling and injuring himself while attempting a "triple" flip while performing high in the air. Tino Orsini (Tony Curtis) is an aspiring performer who talks Mike into teaming up with him for an act, hoping he can teach him to do the triple. Then there's the highly ambitious and beautiful Lola (Gina Lollobrigida of Woman of Straw) who manages to secure a position in their act while bouncing back and forth between both men.

While it's certainly understandable that both men would get the hots for Lola -- in my opinion Lollobrigida was always the sexiest and most beautiful of the Italian sex bombs -- falling in love with such a fickle and manipulative person is something else again. And one can't really see Lola falling for anyone but herself. But Trapeze is essentially a melodrama, and as such feelings are created in and discarded by the characters simply to serve the needs of the plot -- that's all there is to it. As a circus picture, Trapeze is only fair to middling. However, it comes alive during the aerial sequences, which are thrilling, skillfully intercutting the three main actors into the actions of real circus performers. Clearly they were each willing to be photographed doing some aerial work, although not high above the ground one supposes. 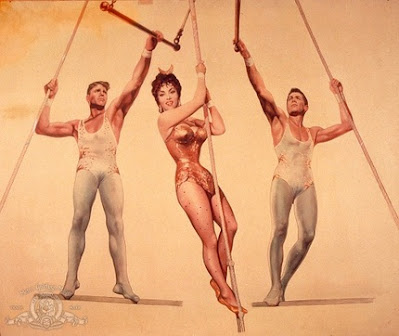 The performances are good. Curtis and Lancaster would reteam for Sweet Smell of Success the following year when Curtis would really come into his own. This is not Lollobrigida's first American film, but probably the biggest English role she'd had to that date. Her character is kind of impossible, and her transformation from opportunist to someone sincerely in love with one of the men isn't believable, but for that I'd blame the script. Others in the cast include Minor Watson (of Beyond the Forest) as a man from Ringling Brothers; Thomas Gomez as the fat and rather obnoxious boss of the Paris circus; Katy Jurado as Rosa, who is carrying a torch for Mike; and Gerard Landry as her husband. There are interesting and flavorful moments in the movie, but it's nothing very deep, although one senses everyone working on the film thought it would be. Malcolm Arnold's score is so overwrought at times that it approaches the comical.
All of the homoeroticism of the novel, The Killing Frost, upon which the film is based, was eliminated, although if you watch it carefully ... In the novel Tino is executed for murdering Lola, although she was actually killed by Mike, who was in love with -- you guessed it -- Tino!
NOTE: It has been said that Lancaster, because of his background, did all of the trapeze stunts in the film except for the Triple. I think this has been very exaggerated. For one thing, Lancaster is clearly in front of a blue screen in some shots and if one freezes the film the aerialist playing Lancaster is clearly a different person in the long shots. 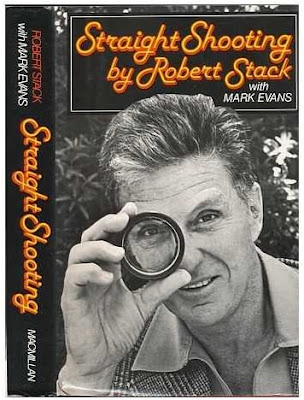 STRAIGHT SHOOTING Robert Stack with Mark Evans. Macmillan; 1980.
Robert Stack was nominated for an Oscar for his role in Written on the Wind, appeared in many other film and TV vehicles, but will always be best-remembered as Eliot Ness on The Untouchables. Stack seems to come from the old school of macho-type actors who feel they must do something braver than emote for the camera, so he writes about going on safari and similar  experiences. A champion skeet shooter, Stack spends a chapter writing on the sport, although this is not as interesting as his musings on show biz. Although born in the U.S., Stack was raised in Europe and didn't speak English for quite a few years. A more cultured man than you might imagine, Stack was introduced to opera at an early age. Stack writes of his relationships with women and his happy marriage, as well as his friendships with the likes of Carole Lombard and Clark Gable. Stack goes behind the scenes of such films as The Bullfighter and the Lady but doesn't even mention co-starring with Joan Crawford in The Caretakers, for shame -- that might have been interesting! Stack has a tendency to cover old Hollywood folklore, which most readers will already be familiar with, too much, as he had a long career and doesn't need to pad the book, but his biggest gaffe is thinking that the film Detective Story (with Joseph Wiseman) was an episode of The Untouchables! (Wise appeared twice on the show but not in the role he played in Detective Story.) One suspects that it was Stack's co-author who keeps him up to date on such matters as Gay Lib; the actor was not thrilled when a comedian thought he was a "faggot" early in his career. Stack, who died in 2003, actually reprised the role of Eliot Ness in a telefilm that aired eleven years after this book was published.
Verdict: Interesting if imperfect look at the career of the man who gave Deanna Durbin her first screen kiss! ***.
Posted by William at 9:05 AM 2 comments: 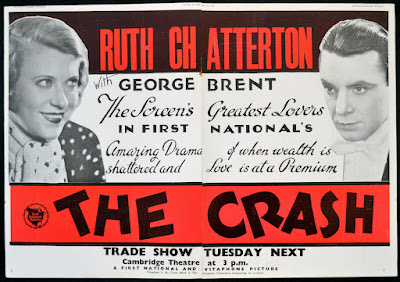 THE CRASH (1932). Director: William Dieterle.
Linda Gault (Ruth Chatterton) grew up very poor and is determined that she'll never be poverty-stricken again. Her husband Geoffrey (George Brent) drinks and importunes her to get stock tips from a man (Henry Kolker) who's smitten with her. When Geoffrey goes broke after the Wall Street crash of 1929, Linda takes what money she can gather and goes off to a sun and fun retreat where she meets millionaire Ronald Sanderson (Paul Cavanagh). Should she go for the loot or settle for love? Who cares? This is a minor film with Chatterton giving a surprisingly stiff and obvious performance. A secondary love story concerns Linda's French maid Celeste (Barbara Leonard) and her lover Arthur (Hardie Albright).
Verdict: Watch Dodsworth [with Chatterton in fine form] instead. **.
Posted by William at 9:02 AM 2 comments: