KING OF THE ROARING 20'S 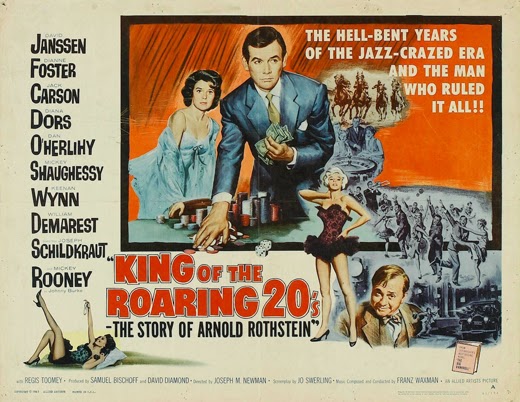 Arnold Rothstein (David Janssen) grows up to become a mob boss in 1920's New York. He fixes races and runs bookie operations with his old pal Johnny Burke (Mickey Rooney). Rothstein marries an entertainer named Carolyn (Dianne Foster) but she becomes tired of being left alone, his crooked deals, and his cold-blooded attitude. The "true" story of Rothstein, aka "The Brain," should have made a much, much more interesting picture than this concoction. True, Rothstein tried to run his operations like a business instead of employing a typical violent mob approach, but even so the picture could have used a lot more excitement, and the facts of his life would have been more compelling than fiction. Janssen [Richard Diamond, Private Detective] is okay as Rothstein, but his essentially small-screen persona only fits the basic and cheap TV tone of the whole production. Foster [The Brothers Rico] is quite good, as is Mickey Rooney, and there are also notable performances from Robert Ellenstein [Too Much, Too Soon] , Dan O'Herlihy, Mickey Shaughnessy, Jimmy Baird (as Arnold as a boy), and especially Joseph Schildkraut as Rothstein's father.

Verdict: Strictly mediocre TV-type fare. **.
Posted by William at 9:30 AM