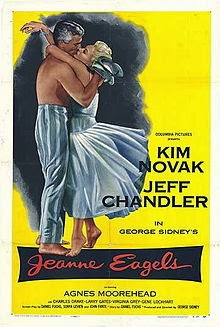 This lamentable biopic purports to be the life story of famous stage and screen actress Jeanne Eagels, but it comes off more like a travesty, almost a parody, of movie star biographies. Part of the problem is the casting and atrocious performance of Kim Novak, who has been seen to much better advantage in such movies as Vertigo and Middle of the Night. Apparently given no help at all in shaping her role by director George Sidney, Novak -- who does have a (very) few good moments -- portrays Eagels by lowering her voice an octave and developing an imperious manner and never seeming remotely human -- in fact at times she's more grotesque than anything else. She confuses over-acting with "Great Acting" and even has trouble with simple line readings. Although there was certainly enough drama in the real  Eagels's life, with two marriages, a drug problem, and death at 39, Jeanne Eagels needs to make up even more slanderous stuff [her family filed a law suit, but you can't libel the dead in the U.S.]. In the movie an invented alcoholic actress named Elsie Desmond (a creditable Virginia Grey) brings Eagels the script for the play "Rain," hoping the latter will interest a producer in mounting the play as a comeback for her. Instead, Eagels steals the play away from Desmond, who then commits suicide. Eagels is seen as being similarly ruthless in other sequences as well. The two men in her life, one of whom she briefly marries, are portrayed by Jeff Chandler [who basically gives a good accounting of himself] and Charles Drake, who is okay as her husband. As Eagels' stern if loving acting coach, Agnes Moorehead gives a competent performance but at times seems affected by the movie's sheer badness. Murray Hamilton does his typical sleazy, oily, repulsive shtick as a vaudeville performer who tries to rape Jeanne. The movie mixes facts with fantasy, such as when Eagels is suspended from the stage for several months by Actors Equity [true] and has her running to vaudeville when she actually went to Hollywood to make (mostly silent) movies [one of which is inexplicably shown at the end of Jeanne Eagels, only it's a musical!]. In actuality, Eagels had a triumph in the first sound version of The Letter, and was posthumously nominated for an Oscar, but this, incredibly, is never mentioned, even though it would have added up to an effective and bittersweet conclusion. Drake and Grey played a married couple in All That Heaven Allows and George Sidney also directed Bye Bye Birdie, for which he was more suited.

Verdict: Eagels certainly deserved better than this miserable schlock. *1/2.
Posted by William at 9:25 AM