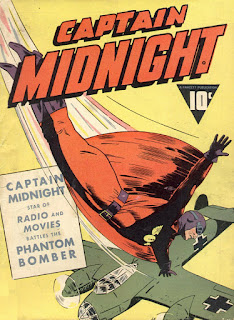 Captain Albright (Dave O'Brien) also uses the costumed and masked identity of Captain Midnight, although everyone seems to know the two are the same. He is aided by his buddies, Ichabod or "Icky" (Guy Wilkerson) and the spunky Chuck (Sam Edwards). A scientist named John Edwards (Bryant Washburn) has invented a special range-finder weapon that he hopes to sell to Washington, but the nefarious Ivan Shark (James Craven) and his gang want to get their hands on it first. Captain Midnight and his own gang, including Major Steele (Joseph W. Girard) and Edwards' daughter, Joyce (Dorothy Short), have their hands full trying to stay alive, outwit Shark and either keep the invention out of Shark's hands or get it back once he's stolen it. Shark also has a daughter named Fury (Luana Walters of Shadow of Chinatown), who helps her father and bosses around his henchmen.

There are some terrific cliffhangers in this serial. In chapter three Midnight finds himself trapped on a plane without a parachute and a cockpit rapidly filling with deadly gas. Midnight is nearly cut in half by a buzz saw in chapter four, and most of the supporting players are nearly crushed by moving walls with electrical charges in chapter fifteen. There is an excellent business with a water tank death trap in a cage inside Shark's HQ in chapter six, and even wilder is a fire pit in chapter ten in which Midnight is trapped on a revolving platform above the flames even as a huge block descends from above. Fury and Joyce have a brief tussle in chapter five. O'Brien is fine in the lead and the others are okay, but James Craven [The Purple Monster Strikes] really steals the show with his portrayal of the nasty and determined Ivan Shark, who is also a master of disguise, causing lots of problems because of it throughout the serial. Lee Zahler's music is right on target. O'Brien and Short appeared together in Spooks Run Wild.

Captain Midnight was adapted from a popular radio show (it became a TV series in the fifties). When this serial became equally successful, it was decided to turn it into a comic book -- in which the character can fly without a plane, unlike the serial -- which was published by Fawcett and lasted nearly seventy issues.

Verdict: Humor, frenetic action, and a fast pace add up to one very entertaining serial. ***.
Posted by William at 9:30 AM