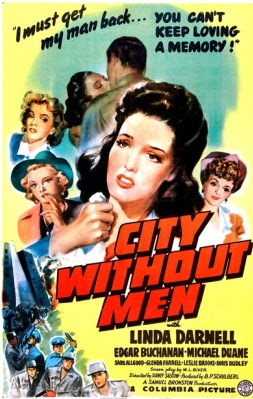 Tom Adams (Michael Duane of Redhead from Manhattan) is framed for  picking up Japanese in a boat, and wrongly convicted of collaborating with the enemy or something and sent to jail for several years. His fiancee, Nancy (Linda Darnell) not only vows to wait for him, but moves into a woman's residence right next to the prison where other wives and girlfriends wait patiently for their men to be released. The husband of the owner of the house, Maria (Sara Allgood) is in jail for life, and in the film's best scene, another wife, Mrs. Slade (Rosemary DeCamp), nearly collapses when her husband is executed at midnight. Other residents of the house include brassy Billie (Glenda Farrell), Winnie (Doris Dudley), Dora (Margaret Hamilton), and high-hattin' Gwen (Leslie Brooks of The Secret of the Whistler), who is dating Mr. Peters (Don DeFore) and hopes to learn where her husband (Sheldon Leonard) hid some money. Edgar Buchanan plays a shady lawyer who is ostensibly trying to help Nancy, but spends most of her money on booze. This is a "concept" movie that seems to have been cobbled together from cliches from other movies, and it's never convincing, becoming fairly ridiculous towards the end. Darnell is fine -- odd that she was cast in this bad "B" movie -- and Allgood, Farrell, DeCamp, and DeFore give very good performances as well.Years later Salkow directed Vincent Price in Twice-Told Tales.

Verdict: Not utterly terrible but not worth the time it takes to tell. **.
Posted by William at 9:15 AM