MARK OF THE DEVIL 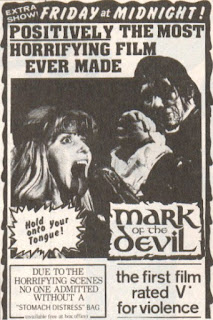 "The most attractive things in the movie were my close-ups." -- actor Udo Kier.

Promoted as "the most horrifying movie ever made" -- patrons were given a "stomach distress" (vomit) bag along with their ticket -- Mark of the Devil certainly has its disgusting moments, but the fact is that once you get past the unpleasantness it's not a bad movie. Lord Cumberland (Herbert Lom), a famous witch hunter, arrives at a village with his young assistant, Christian (Udo Kier), and upsets the local witch hunter Albino (Reggie Nalder), who brands women who rebuff his slimy advances as witches. The latest victim is the busty tavern wench Vanessa (Olivera Vuco), who has caught the eye of Christian and vice versa. Cumberland proves little better than Albino, as he threatens a baron (Michael Maien) with torture unless he turns over his inheritance to the "Church," has thumbscrews and the rack applied to a young woman who insists she was raped by a bishop (in the movie's most notorious scene, this poor gal's tongue is extracted), and rapes the beautiful wife (Ingeborg Schoner) of a puppeteer. (The puppeteer is played by Adrian Hoven, who took over the direction of the film from Armstrong according to Kier.) Another hard-to-take scene has the bare-assed baron sat forcibly down on a bed of needles. Sadly, the torture sequences are probably accurate, and the movie makes it clear that there were often political, financial or sexual motives behind the witch hunters' accusations. The villains in this are utterly loathsome, and the ironic ending has the elements, oddly enough, of operatic or Greek tragedy. While the story holds the attention,  the actors are all good, and the pace is fast, Mark of the Devil hasn't got much style. It's too bad the film makers were more determined to make a horror film than a drama with horrifying sequences. Armstrong only directed one more movie 16 years later. This was a West German production, not very well dubbed, but at least we hear Herbert Lom's actual voice.