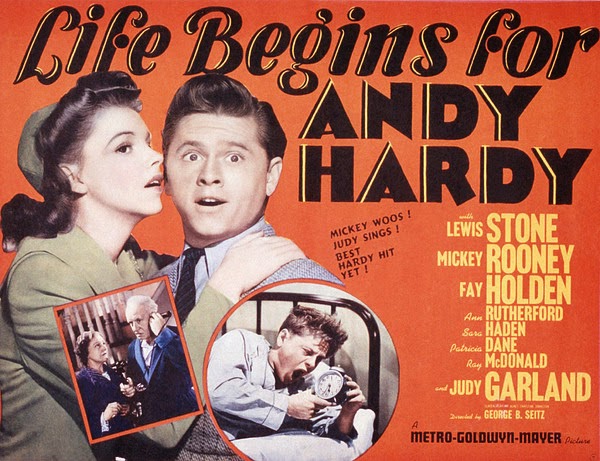 "A child? Listen Andy Hardy, my mother just bought me an evening gown that has no visible means of support!" -- Betsy

"Somebody's dead -- it doesn't seem right unless somebody cries."

Although 18-year-old Andy Hardy (Mickey Rooney) has been offered a college scholarship, he decides to wait a month and see what living and working alone in the big city, Manhattan, will be like -- "today I am a man," he declares as he drives away from Carvel with ever-hopeful Betsy Booth (Judy Garland). Although previously he had run from a sophisticated city woman as if she had the plague, in this outing he has better luck with a vivacious if slightly shady secretary named Jennitt (Patricia Dane). A genuinely nice young man, Andy offers to share his room with a young aspiring dancer, Jimmy (Ray McDonald), who has become homeless. Meanwhile Betsy does her best to help a proud Andy while he struggles to find work, finally settling at Consolidated Stocks and Bonds, run by the gruff Mr. Maddox (Lester Matthews). And then an unexpected tragedy occurs ... Life Begins for Andy Hardy is one of the best Hardy films, with an excellent script by Agnes Christine Johnson that provides plenty of very funny moments along with more sobering sequences. Rooney and Garland are both simply superb, with the latter looking especially pretty in this entry. Dane [Rio Rita], McDonald [Presenting Lily Mars] and Matthews [The Adventures of Dr. Fu Manchu] give top-notch performances as well. The picture continues directly after Andy Hardy's Private Secretary, and almost  immediately Andy and Polly (Ann Rutherford) decide to split up amicably. Marion is not seen, and Beezy (George Breakston), now a milkman, and Aunt Millie (Sara Haden) appear only briefly. As usual, Fay Holden is wonderful as Mrs. Hardy. There's an interesting scene when Andy implies that one is washed up at around age thirty, and the Judge (Lewis Stone) all too clearly is thinking of his own age and his lost youth.  Life Begins for Andy Hardy is occasionally on the sappy side -- those evil big city women and so on! -- but it's very entertaining. Mercifully scenes involving a priest and rabbi, undoubtedly concerning a certain character's death, were left on the cutting room floor.

I agree - in my opinion Love Finds Andy Hardy and Life Begins are the two best entries in the series. And not just because of Judy...but their chemistry positively sparkles. Judy would very soon become a much bigger star than Rooney...I think they only costarred in Girl Crazy together after this, other than the cameo and song in Words and Music in 1946.

Rooney is at the height of his charm and energy in this one!
-Chris

Absolutely. And Garland just adds that extra sparkle to it. The two were a superb team!