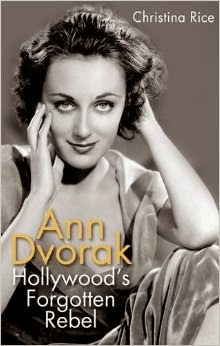 Like many of us, Christina Rice first discovered Ann Dvorak in a videocassette of Three on a Match decades after the film had been released, and became a fan, intrigued by the reasons why this talented actress didn't have a much bigger career. Biographies written by fans can often be superficial love-fests, but Ms. Rice has avoided that trap by not only doing solid research, having access to personal letters, but by recognizing that Dvorak could sometimes be her own worst enemy. Dvorak took on Warner Brothers in court before Bette Davis did; the trouble was, Bette Davis was Bette Davis and Ms. Dvorak was nowhere in that league of fame and clout. She was poised for potential stardom when she got married [to first husband, actor-director Leslie Fenton of The House of Secrets and Pardon My Past] and simply took off for a several months-long honeymoon all over the world and never quite got back in the studio's good graces. She had ambition but it was at war with a certain need for independence which was frequently stymied by her marriages, all three of which had definite difficulties, to put it mildly. Rice not only examines Dvorak's film roles thoroughly, but absorbingly details her personal life, such as when she followed British Fenton overseas during WW2 out of devotion to him, but afterward found she'd outgrown him; her troubled relationship with her mother, who'd appeared in silent pictures but was long forgotten; and her on-again off-again third marriage to Nick Wade which played out in Hawaii and elsewhere; not to mention her austere final days when she worked on various abortive projects to no avail. Dvorak gave some fine performances throughout the years, with a particularly excellent portrayal in A Life of Her Own; she also appeared in such films as Scarface, The Strange Love of Molly Louvain, Gangs of New York, Flame of Barbary Coast, The Private Affairs of Bel Ami and The Walls of Jericho, among many others. The book is enriched with some great personal photos as well.

Verdict: Excellent biography of an actress forgotten by all but old film buffs. ***1/2.
Posted by William at 9:20 AM